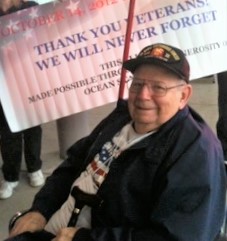 Albert J. Berard of Taunton entered into rest on April 27, 2020 at the age of 95 of complications stemming from the Covid 19 virus. He was the beloved husband of the late Genevieve Souza Berard. Prior to his retirement he had been employed as an engineer’s assistant at the Foxboro Company and earlier as a manual arts therapists’ assistant at the VA Hospital in Brockton. Albert was a proud Naval veteran of World War Two, having seen action in both theaters, and participated in the invasion of Normandy, for which action he was made a Chevalier of the Legion of Honor by the government of France. He was also a communicant of the former St. Jacques parish in Taunton. Albert leaves two loving sons; Wayne-Daniel Berard of Mansfield, MA and Donald J. Berard of North Carolina, and a foster-daughter, Denise O’Neil of Lowell. He is also survived by his sister, Beatrice Lecuyer of Fairhaven, 4 grandchildren, 4 great-grandchildren, and many nieces and nephews. Brother of the late Leo Berard of Taunton, Roland Berard of Weymouth, Rose Arguin of Taunton, Yvonne Cote of Taunton, and Norman Berard of Raynham. Traditional wake and funeral services being rendered impossible by the current medical situation, a memorial service will be held at a later date.

To send flowers to the family or plant a tree in memory of Albert J Berard, please visit our floral store.

You can still show your support by sending flowers directly to the family, or by planting a memorial tree in the memory of Albert J Berard
Share a memory
© 2020 Riendeau-Mulvey Funeral Home. All Rights Reserved. Funeral Home website by CFS & TA